The Insane Growth Hack Which Grew Alphabet’s Earnings by 45% 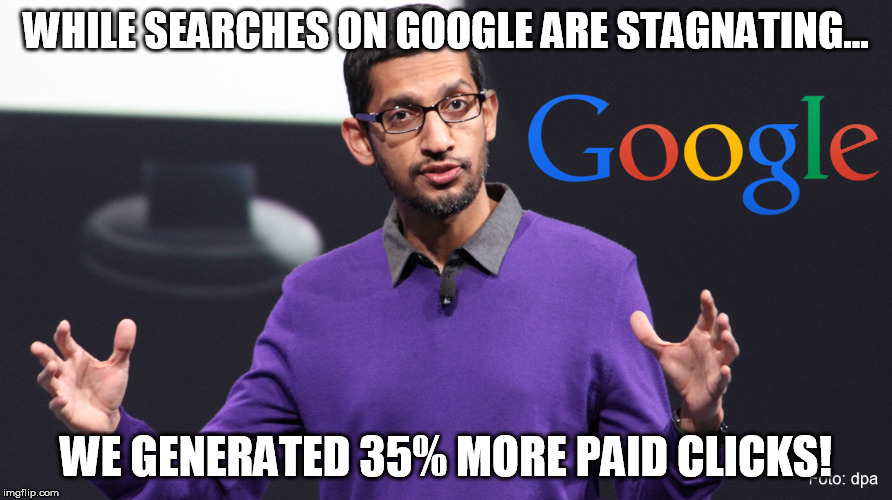 This is, what the smartest engineers of our generation have been working on for the last 5 years… Yes. While literally not a single incremental search has been done on Google, hence neither more customers nor sales have been driven to websites, advertisers paid for 35% more clicks than last year. However as (not all) advertisers are stupid, they paid 16% less per click. And this is pretty much what has been happening at Google for the last 4 years: More clicks at lower prices.

By the way, Google’s former CFO Patrick Pichette has been very busy in the last years, explaining that what you see above is not a correlation of any kind. What looks like ad inflation to anyone with a high school degree, in fact is the effect of the , , , something not to worry about depending on the earnings call you’re listening to.

However, now that literally 100% of search result real estate is covered in ads at the expense of organic listings, how will Google manage to drive more cheap ad clicks in the next years?

Someone just spottet a rel=”Publisher” tag being displayed in…

Wow, this is the first time I can see Google testing to actually display the rel=publisher information in SERPs. The displayed  site, Wimdu.de, has...

Google askes you to report scraper sites, but then…

After Google for the first time provides a form to report scraper sites ranking on top of the original content, Dan Barker send this...